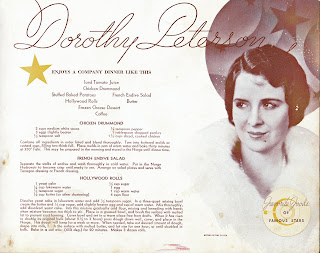 The talented Dorothy Peterson (December 25 1897 - October 3 1979) offered our fair for today. The Hector, Minnesota actress creates a company dinner which includes: Chilled Tomato Juice, Chicken Drummond, Stuffed Baked Potatoes, French Endive Salad, Hollywood Rolls, Butter, Frozen Cheese Dessert, and Coffee.
I just have to say, I'm not sure I could have eaten in 1930s Hollywood. Just give me the rolls and Baked Potatoes. The Chicken Drummond sounds like a white gelatinous custard which nauseates me. And I don't even want to venture a guess as to what Frozen Cheese Dessert is! 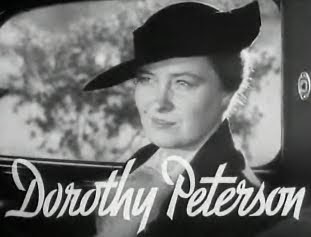 Unfortunately there appears to be next to nothing in terms of info about Dorothy Peterson available. She played mostly maternal roles and was active from the 1930s-1960s in film and television. She appeared in many major motion pictures including: Mr Skeffington, Saboteur, Lillian Russell, Dark Victory, Treasure Island, and I'm No Angel (which is showing below)
On a side note, let's see if anyone can guess tomorrow's very famous star. I'll give you a few hints: she is most widely known in pop culture for being part of a team and was the highest paid star of 1942. Do you know who it is?
Best Wishes A at 11:58 PM

Not the scariest menu to date, but a bit hit-and-miss, I agree. I wonder if the "frozen cheese dessert" was a 1930s precursor to the no-bake cheesecake?

Goll, I hope it is some kind of cheesecake. That would make up for some of the rest of the meal :)