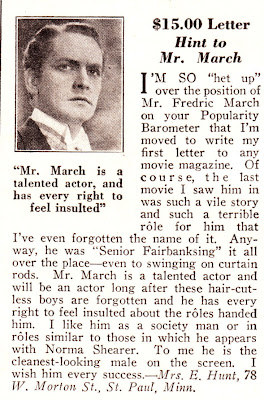 Mrs. E Hunt was quite impassioned about Fredric March, TCM's October Star of the Month. Reading this letter, I'm quite curious which "hair-cut-less boys" she was referring too. 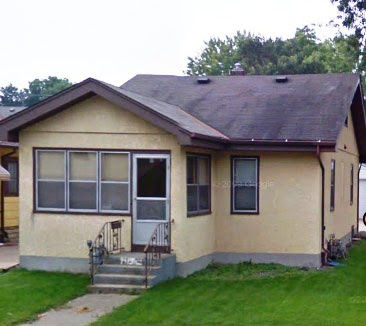 This is what Mrs E. Hunt's house looks like today. She no longer lives there, but I definitely think she earned her $15 prize. What an impassioned letter from a true Fredric March fan. 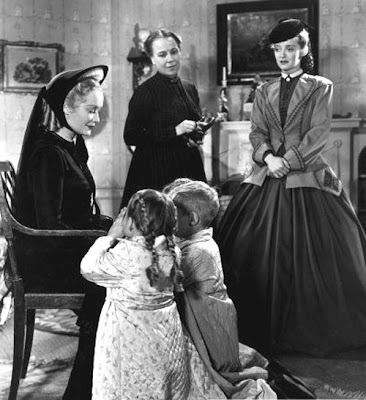 Watched Old Maid (1939) today in honor of Miriam Hopkins; birthday. I really enjoyed the film. Bette Davis' character has a child out of wedlock and since it was the late 1800s, she went away and had the child, claiming illness. Of course, Delia Ralston (Miriam Hopkins) had to stop Charlotte's (Bette Davis) marriage to another man because of the illegitimate child. When Charlotte becomes widowed, she offers Delia and her illegitimate child a home with her. A touchy relationship between the two women forms based on who really is the mother of Charlotte's child. 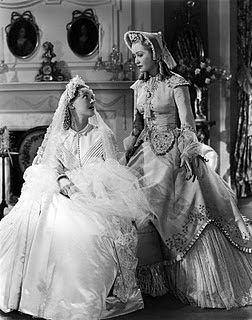 Bette Davis was the star, and she did a fabulous job, but I was drawn to Miriam Hopkins. Her portrayal was strong and sympathetic. Miriam gets a bad rap because of her off-screen issues with Bette and other actors, spending her free time with writers instead of Hollywood elite, consulting a psychic before choosing a role, and of course - her suspected communism, but I've loved her in every film I've seen her in from Dr Jekyll and Mr Hyde to These Three (when will this film ever come out on DVD?). 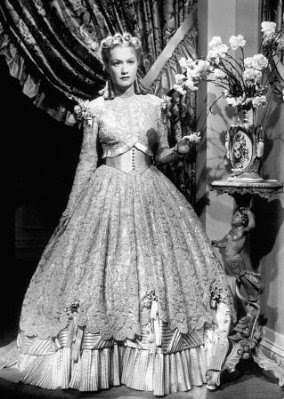 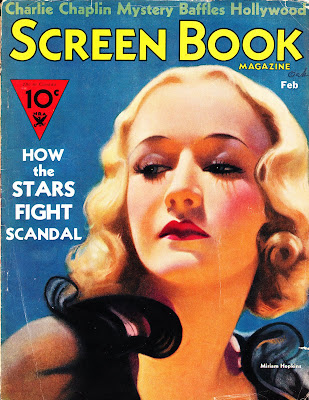 A fun George Brent Fact - He was an IRA Guerrilla in the Anglo-Irish War and fled Ireland with a price on his head. Where else but America could someone go from guerrilla to leading man? 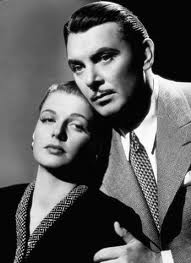 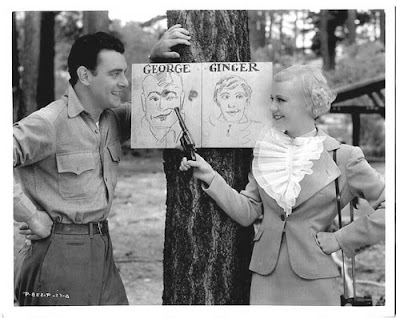 George Brent and Ginger Rogers in 1935 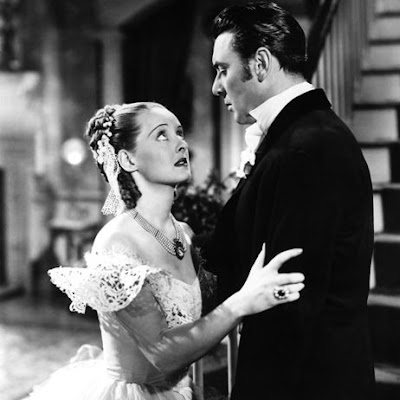 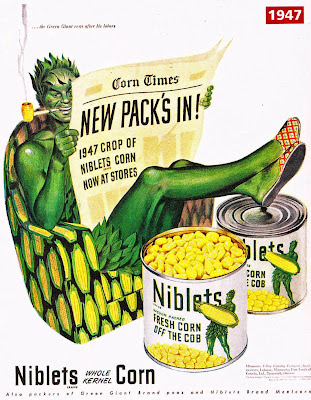 I guess I generally think of the Green Giant as a lovable mascot since he was created in my home state, but this ad is totally creepy to me. Jolly Green is just supposed to be the man of the house, coming home to have his paper, slippers, and corncob pipe but instead he looks a creepy devil with an ulterior behind the niblets. What is in the niblets? Are the niblets taking over the world? Why won't the Corn Times tell us what is really going on? Ahhhhhhhh!?! 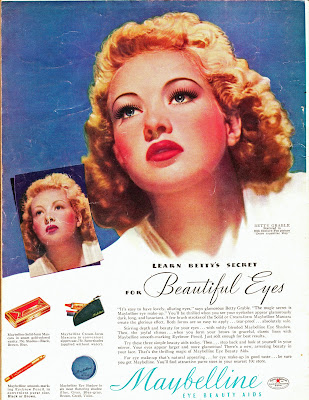 Matinee Monday: Can You Spot Your Favorite Star's Autograph? 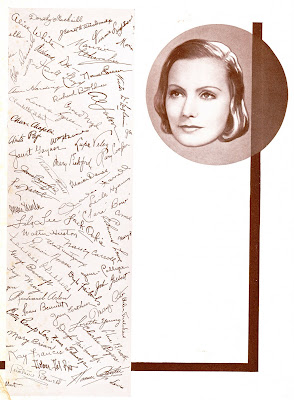 Can you find your favorite star's autograph? These signatures were from a page in a 1929 Cosmopolitan. They are pre-printed and not original, of course. I wish I was that lucky! Such greats as Mary Pickford, Clara Bow, Ramon Novarro, Douglas Fairbanks, Loretta Young, and Claudette Colbert are on it. Who can you spot? 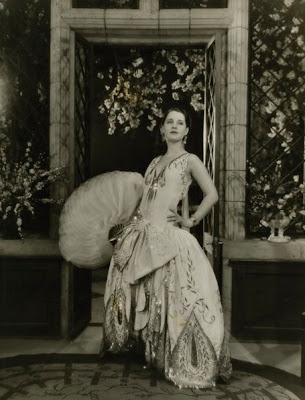 My favorite out of this bunch is Norma Shearer. Total goddess. 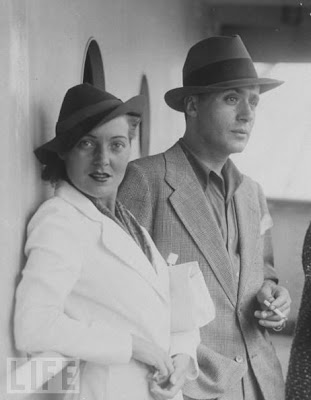 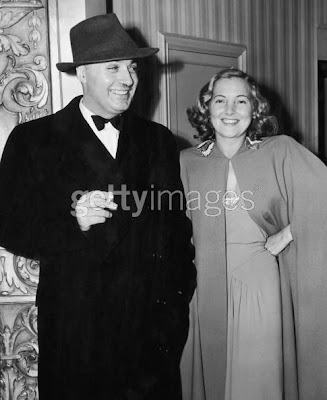 My favorite Charles Boyer film is Gaslight with Ingrid Bergman. He was completely devious! 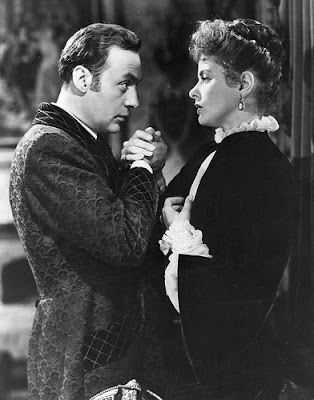 Weird Wednesday - Sticking it to the Fuhrer 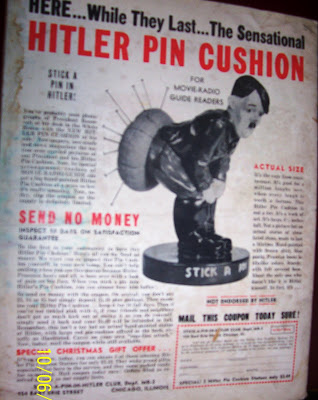 I found this fun ad on the back of my December 5-11, 1942 issue of Movie Radio Guide. I thought it would be a perfect fit for Weird Wednesday. 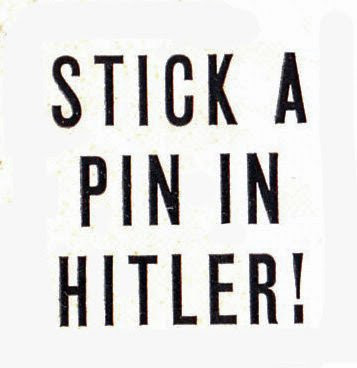 How did they know what I've always wanted to do? 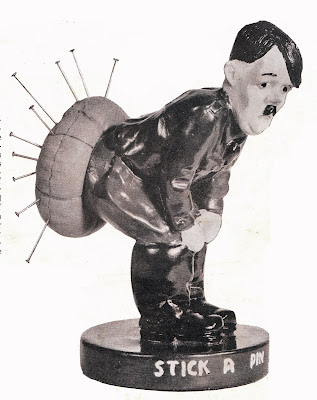 Fantastic! It lasts a lifetime and even has his Prussian boots. 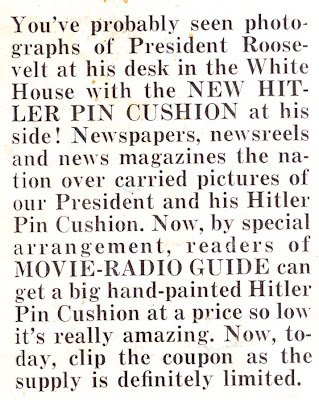 I looked all over the place for photos and video of FDR and the pin cushion, but was unsuccessful. It's got to be out there somewhere, but I haven't been able to find any today. 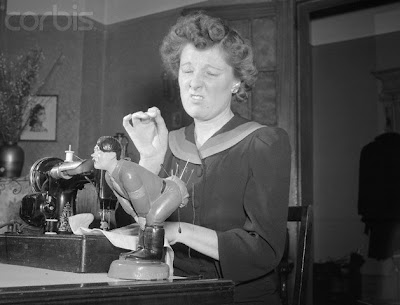 Definitely think Hitler would be hollering, but this women looks awfully pained having to stick him in the bum. 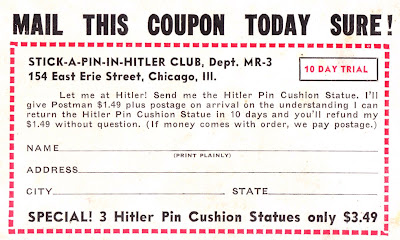 Can you believe Hitler wouldn't endorse such an item? It's like he doesn't think it's funny that someone would stick pins in his bum. Obviously he needed a sense of humor 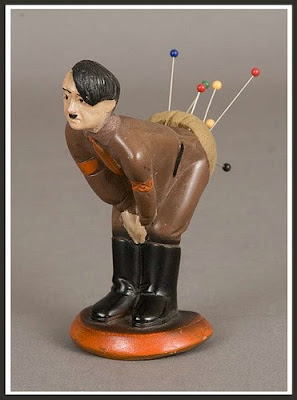 If you have one of these gems lying around your house today or see one at a yard sale, they go for $100 - $450. Not bad for a novelty pin cushion!