I just love films with a gimmick.  They are cheesetastic and fabulously campy, so I was thrilled to see The Hypnotic Eye on TCM.  The premise of the film is that women are finding themselves hideously deformed.  The catch - they deform themselves without being aware of it.  The opening scene alone was shocking - a woman sets her hair on fire.  Grotesque, yet absolutely no way I was turning the channel.  Jacques Bergerac plays hypnotist Desmond.  Through the course of the film we find out that the women who are disfiguring themselves have all been hypnotized by the enigmatic Desmond.  I won't spoil the ending, but cult icon Allison Hayes, who plays Desmond's assistant Justine plays heavily into it.

What was so interesting about the film is Bergerac was really trained by a hypnotist and the segments of the film with the hypnotic elements really had actresses that were hypnotized.  I found the stage portions intriguing.  At home, I followed along with the film, and it really added to the experience.  I wish the main audience participation element was earlier in the film, because it totally took you out of the plot of the film.  The point of the participation segment occurred right before the climax of the film.  Taking the 10 minutes out at that point detracted from the plot itself.  It would have made much more sense near the start of the film.


I would have to give this film a 8 out of 10 on the Cheesetastic Film Scale. 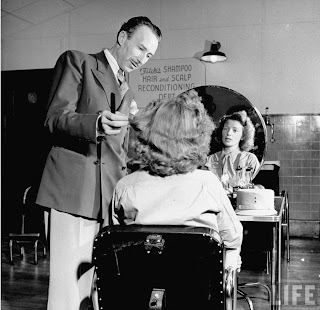 These lovely WACs are getting beauty treatments at Fort Des Moines in 1942.  How fantastic is it that there was basically a beauty salon at the fort?  One thing I love about the 1940's is that even when they were busy saving the world, women always made time to look good.  How awesome is that?  I don't think I'd have enough energy to do anything more than throw my hair in a ponytail, yet these fantastic women slept in pincurls and made sure their makeup was perfect.  Amazing. 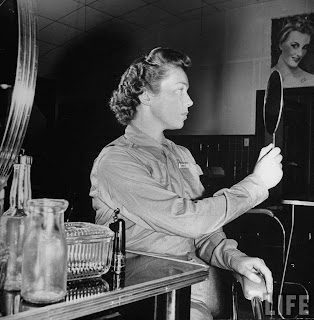 Posts of the Week: Glamour Daze


Glamour Daze has been on point this week.  It has some of my absolute favorite posts of the week.  Two of my favorites are a fun post about WAC exercise and a cool post about a 1940's makeover.  What I love about the WAC exercise, is that it seems entirely possible to perform today by a variety of fitness levels.  I could see myself doing it today.  The makeover is intriguing, and doesn't seem completely impossible.  No matter how easy a makeup tutorial seems, I never seem to be able to do it properly.
Best Wishes A at 12:03 AM No comments:


Martha Raye has cool shoe collection.  Even one of those pairs would be fabulous, let alone a full cupboard full.  I'm totally jealous!

When I think Nero Wolfe, I envision Sydney Greenstreet, since the only exposure I've had to Nero Wolfe is the radio program he starred in. I wasn't sure I'd enjoy the books, so I've waited to give this one a try. Another case of should not judge a book by its cover. The book follows Paul Chapin and a group of men who had been responsible for his crippling when they went to college. The group has formed a league to try to make amends for their prank gone wrong, but begin to get scared when members of the league starts to turn up missing or dead.


What I found interesting about this book was from the very beginning, you were basically given the killer. The rest of the book involved trying to find ways in which to convict Paul Chapin. The journey was a fascinating exploration into human nature and psychology. I found the thought process of Wolfe, his helper Archie, and the surrounding characters intriguing. The characters were so fully developed that I found their eccentricities completely believable and endearing.  Stout has a real gift for language, and that became one of the great features of the book. I enjoyed Stout's voice immensely, and I can't wait until I have the chance to read another Nero Wolfe book. I found myself only reading a bit every day because it was a treat, a little morsel of mystery goodness I felt privileged to read.


American Duchess has a fantastic post about Late 18th Century Gowns.  Very informative and the illustrations corresponding to the descriptions were stunning.  She also has a wonderful post about panniers.  American Duchess has to be one of my favorite historical costume sites.
Best Wishes A at 1:47 AM No comments: