Is expected to file for divorce soon, and that’s a pity.  He and his wife went through some mighty lean years together.  Now that his career is clicking, his marriage seems to be doing just exactly the opposite.  The price of fame can be high.

I assume Movieland is referring to his first wife Margaret Ann Havelhurst.  I cannot find any marriage dates for the two.  Martin was also married to singer Peggy Lee from 1956-1958.
Best Wishes A at 3:59 PM No comments:

Jimmy and Ingrid are Tempted

Has never given up the idea of doing the story of Adam and Eve for the screen.  At first he wanted Jimmy Stewart and Ingrid Bergman for the leads.  Now he’d settle for John Wayne and Audrey Hepburn.  How’s that for casting the Biblical version of the original man and woman.

Unfortunately McCarey never was able to make his film because of the necessary nudity.  Those in charge of the production code would not approve the script, let alone the filming.

After making a neat fortune from “A Star is Born” is thinking about quitting acting and devouting his time to producing.  The Masons, who blasted Hollywood before coming here, are now two of its staunchest citizens.  Well they might be.  The movie capital has given them undreamed of wealth and opportunity.

While James Mason is known primarily for his fantastic acting skills, he did write, produce, and direct.  I'm glad he didn't quit for we never would have seen his delicious performance in North by Northwest, one of my favorite films.
Best Wishes A at 10:02 PM No comments:

(After being elected chief of police at Universal City)  “Now I’ll be able to pinch producers instead of vice versa”. 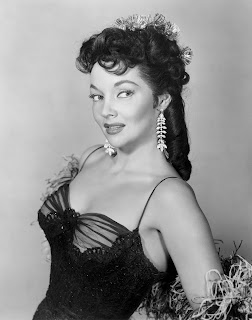 Mari Blanchard’s romance with that confirmed bachelor, Greg Bautzer, has gone completely bust.  She held onto the handsome lawyer about as long as any girl has.  Greg was dating Vera-Ellen shortly before she announced her engagement to Victor Rothschild.  That announcement caused about surprise in Hollywood as did Jean Peter’s marriage.  Almost everybody thought that Vera-Ellen was real gone on Richard Gulley, who is said to be carrying a huge torch for her.

Who is Miss Broadway Musical in person, is deserting the stage to devote her time exclusively to television and motion pictures.  Between jobs you can just call her madam.  She’ll live with her husband in a twenty-seven-room house on a six-acre estate near Denver, Colorado.

The husband Movieland refers to was Ethel's husband number three, Robert Six, president of Continental Airlines.  They were married from 1953 to 1960.  According to several sources, Six was upset that Ethel was satisfied just to be a housewife.  He expected her appearances to be free publicity and good will for Continental Airlines.  They would divorce following discovery of Six's affair with actress Audrey Meadows.  While it didn't work out for Six and Ethel, Audrey Meadows and Robert Six were married 25 years, from 1961 until his death in 1985.

“I’m a serious minded and intense little devil – so tense I don’t see how people stay in the same room with me.  I know I wouldn’t tolerate myself”.


I have to say that when someone redeems themselves in my eyes, I have to admit when I'm wrong.  Jones is on my Least Favorite Actresses list, and she did a fantastic job in this film.  I finally watched Tender is the Night (1962), based on the book by one of my favorite authors, F. Scott Fitzgerald.  Jennifer Jones plays, Nicole Driver, a rich mental patient whom Dr. Dick Driver, played by Jason Robards, cured and then marries.


Jones played the role to perfection.  Robards was admirable as well.  The film is mature and thought-provoking, if not for the bright colors one might almost think it depressing.  But that's a Fitzgerald story.  If only it didn't have Tom Ewell in it.  Could someone please describe the appeal of him to me?
Best Wishes A at 2:20 AM No comments:

Jane Gets Stopped on her Way to Her Wedding

And Pat Nerney, after waiting all this while, got stopped by a cop for speeding on the way to their wedding in Ojai.  Pat explained the situation.  The cop wished them lots of luck and handed them a ticket anyhow. Jane had an interchangeable wardrobe made for her European honeymoon; so she could get all her fine feathers in two suit cases, an overnight bag, and a hat box.


Jane has been married 5 times, currently to former child star Dickie Moore.  I find Jane's films simply delightful and it is too bad that classic movie musicals went out of style and we have been deprived of this wonderful star on screen.
Best Wishes A at 1:51 AM No comments:

Ursula and Bob have a Cozy Christmas

Is hoping to get her eight-year-old son here from Germany by Christmas so he can join her. Bob Taylor, and his sister for the holidays.  The boy’s travel was held up by an appendectomy.  It’ll be curious to see Bob with two children on his hands and living in a new house of his own.  He was never very much of a family man even when married to Barbara Stanwyck.

Will Joe and Marilyn Ever Reunite?


And Joe DiMaggio who supplied the biggest screen divorce story of the year, may also come up with the largest reconciliation.  At this writing, Marilyn still has her divorce on file, but Joe, with time for reflection, seems to think he acted too hastily in walking out on his blonde bride.  And he was the one who did the walking, of that you can be sure even though Marilyn hastily applied for the divorce.  Joe was blazingly angry at something about which he wouldn’t talk.  The rumor mill has been working overtime to try to come up with an answer.  But Joe took the first active step toward a reconciliation when he visited Marilyn while she was hospitalized for minor surgery.  It was the concern that a man shows for his wife and not a divorced mate.  If they reconcile, and we believe they will, both Marilyn and Joe will have to learn a little more of the old game of give and take which has saved many marriages.  Certainly Marilyn has no intention of chucking over her career and Joe will have to accept that fact – just as Marilyn will have to accept the fact that a marriage brings responsibility to the home.  The highly publicized separation could be the best thing that ever happened to that marriage.  We believe the reconciliation will be as sudden as the divorce.  Marilyn needs a long rest, which a second honeymoon could provide – rather than the publicity field day occasioned by their first.

We all know the story of Marilyn and Joe.  If not, there are plenty of sources which speak of the topic.  I wish they could have made things work.  They seemed to have a lifelong love, or at least lifelong respect for one another.  Joe certainly never married again and Marilyn is known to turn to Joe when life was roughest.


There were rumors of the two reuniting in February 1961, but though Joe nursed Marilyn through this tough moment in her life, the two never remarried.  Maybe they found each other again in that great baseball diamond in the sky.

Ava Gardner
Must have found it ironical indeed to be attending the Hollywood premiere of “The Barefoot Contessa” with her press agent, David Hanna in view of the fact that Edmond O’Brien’s savage portrayal of a press agent is a highlight of the picture.  But then she had her hose on and was gorgeously gowned besides.

Humphrey Bogart, one of the stars of the picture, caused raised eyebrows by not appearing at the premiere.  Wife, Lauren Bacall, showed up with the David Nivens, explaining that Bogie had an early studio call the next day.  That was a lame excuse, because Humphrey is noted for staying up to all hours.  And you can bet that he was wide awake enough to discuss audience reaction with Lauren when she got home.  Trouble?

It is widely disputed that Bogart had an early call.  From what I was able to find out, the "no show" could be from one of several reasons:

The Milwaukee Sentinel dated November 21, 1954 had some fun commentary on the premiere:

"Much longer hair was seen here than on smart women in the East - the longest ponytails in the world, and more red heads and white blonds than any other shade."

"Among the well-dressed men were Charles Coburn with a monocle, Edward Arnold, Victor McLaglen, and producer Jerry Wald."

"Lauren Bacall was in red and black brocade embroidered with gold coin dots."

"Louella Parsons, who came with James McHugh, was in an orangey-red gown with a beautiful mink stole and a magnificent diamond necklace and diamond earrings."

"Doris Day was in navy tulle and silk jersey with a mink cape."

""Marla English was in gold lace with a white fox stole"

""Mrs. David Niven, who came with her husband, wore a white beaded net gown with a great skirt with swags of net and a white fox fur stole."

"Janice Wells, TV actress, in a white brocaded shirtwaist type gown girdled with a gold cummerbund, posed barefoot in front of the theater."

Sad to hear the delightful Ann Rutherford passed away.  Born November 2, 1920 in Vancouver, Canada, she was one of the last remaining cast member of one of my favorite films, Gone With the Wind.  She seemed such a sweet, delightful woman.  She will be greatly missed.

Sadly, so I fear there are few of the greats left.  So glamorous, vibrant, and wonderful actors, they remind me of the best time in film history.

Today, I can count on one hand the number of people I consider actors today.  I don't know what they are, but it feels like to me any old person could be thrown in a film these days and it wouldn't matter.  Just throw in a scantily clad girl and some gross-out humor or some CGI crap and you've got a hit.  What's the point of actors anyway when computer generated things seem to be more important?  I enjoy maybe one new film a year while I find at least one thing redeeming in every pre-1960s film I view - hence this blog.  Please, bring back stories, glamour, and actors in films.
Best Wishes A at 2:30 AM No comments: 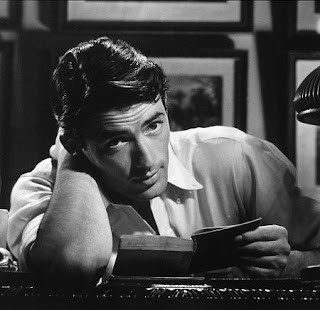