Sunburning With the Stars - Nancy Gates

Nancy Gates was born February 1, 1926 in Dallas, Texas.  She starred in 34 films and serials and 55 television appearances.  Ms. Gates married American Airlines Captain Bill Hayes on May 17, 1948.  They were married 44 years and they had 4 children together.  Nancy retired in 1969 to be closer to her family.  At the time of this post, the lovely Ms. Gates is still with us.

Email ThisBlogThis!Share to TwitterShare to FacebookShare to Pinterest
More Info: 1940s, Actresses, Behind the Rising Sun, Member of the Wedding, Nancy Gates, Physical Culture, RKO, Stars Still With Us, Summer, Sunburning With the Stars, TCM, Television

Sunburning with the Stars - Ida Lupino

Sunburning With the Stars - Joyce MacKenzie

Joyce MacKenzie, born October 13, 1929 in Redwood City, California, is appeared in films over an almost 20 year span.  Known primarily for playing Jane to Lex Barker's Tarzan in Tarzan and the She-Devil, this lovely lady is still with us at the time of this post. 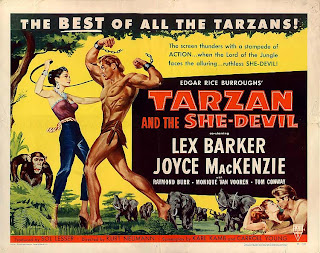 Sunburning With the Stars - Jane Frazee Flaunts It

Sheila in the Sun

Sheila Ryan (June 8, 1921 – November 4, 1975) - Born Katherine Elizabeth McLaughlin in Topeka, Kansas, Ms. Ryan was a 20th Century Fox player.  Although appearing in a couple Laurel and Hardy films, she is best known for her B Western work.  She was married 3 times, most notably to western side-kick and Green Acres's "Mr. Haney" Pat Buttram.  They were married from December 26, 1952 until Sheila's death from lung cancer.  Sheila virtually retired from acting when she married Buttram.  They had one child together, Kerry.
Best Wishes Amanda at 3:56 PM No comments:

"Something new in the party line was tried out by Mrs. Lawrence Tibbett recently.  She entertained with the London String Quartet at a distinctly highbrow function.  It proved no great strain either on the Hollywoodians, who are scarcely acclimated to so much artiness of an evening.  We noted among the guests Ina Claire, Dale Owen, Fay Wray, Theda Bara, Leslie Howard, Kathlyn Williams, John Loder, Walter Huston, Marie Dressler, and others of a select group.


After the music the guests were privileged to disport themselves in the swimming pool, but the only ones who took advantage of that frivolity were one or two members of the quartet."

Since I always have trouble sleeping, I thought I'd look into some old school tips for sleep aid.  All sound tips, but some impossible to achieve.  Firstly, I can't shut off my brain so I'm always thinking about my cares and worries.  Secondly, my alarm clock has to be jarring or I'd never get out of bed.  I comply with everything else except the pajamas, but I can work on that.


Sweet dreams,
Mandy
Best Wishes Amanda at 12:05 AM No comments:

Hollywood has a new dance called the "Bouncing Baby".  It is also sometimes known as the "Jump-it".


We saw it performed at a dinner-dance given be Mary Pickford for Lady Mountbatten.  Miss Pickford herself, Marion Davies, Doug Fairbanks, Jr., and Harry Crocker were participants.


The men join hands to form a sort of circle, and the women hoist themselves onto their arms.  Then the men jump and move at the same time in a circle, keeping time with the music.  It is both weird and noisy."


I think it sounds wonderfully fun.  I don't know why Picture Play was such a fuss-budget.


The Mountbattans's 90th wedding anniversary would have been July 18, 2012. Royal Musings has some great posts about their wedding day:


Finding the Girl
The Guests
The Bridesmaids
The Gown
The Ceremony

Comebacks in the movies are attaining amazing proportions.  The studios are apparently deciding that old screen names are the best, what with the failure of so many stage players.  Faces you will soon be seeing again are those of Dolores Del Rio, Billie Dove, Agnes Ayres, Olga Baclanova, Anna May Wong, and, most notably, Mae Marsh.  Mae, of course, plays the mother in Over the Hill, replacing Cecilia Loftus.


Miss Marsh has never done a talkie.  She was chosen because she was young and a mother.  It was felt Miss Loftus, a veteran stage actress, would perhaps not be suited to the more youthful sequences in the picture.


From what I can tell, these starlets tried, but Dolores Del Rio, Anna May Wong, and Mae Marsh had the most success, even though they often appeared in films un-credited.  Cecilia Loftus was a well-known Scottish actress.  She acted in 12 films, 3 in 1931.  Unbeknownst to me, I have seen her in two films: The Old Maid with Bette Davis and Miriam Hopkins and The Black Cat with Basil Rathbone and Bela Lugosi.
Best Wishes Amanda at 5:49 PM No comments:

Cooper On the Mend

"Gary Cooper won't have to go to Arizona for his health.  He has been ailing, but his early recovery was anticipated, at latest reports.  Diagnosis of his trouble was given as jaundice, rather than anything more serious.

Gary has much to look forward to in his professional life right now.  Paramount has bought Farewell to Arms for him, which is considered a stunning story acquisition.  Eleanor Boardman, signed a five-year contract by Paramount, is likely to play opposite him."

Unfortunately for Eleanor, Helen Hayes would play the lead opposite Cooper.  The film would be released December 8, 1932.  Eleanor accidentally became an actress.  She was "discovered" after she lost her voice. Active from 1922 until 1935, she is best known for her role in The Crowd.

Constance Snags Herself Another Beau

"Constance Bennett now sports two beaus, Joel McCrea is the new addition.  He is reported to be cutting in on the Marquis de la Falaise de la Coudraye.  He is tall, robust, and handsome chap who has been in movies since the early single days.


He doesn't have exclusive rights to Constance, however.  The Marquis and he both sometimes lunch with her.


McCrea has played in two of her pictures - Born to Love and Common Law."


Bennett and McCrea would eventually star in a total of 4 films together.  And the Marquis really had nothing to worry about for he and Constance would marry later that year, a mere days after divorcing his wife, the formidable Gloria Swanson.  He and Bennett divorced in 1940.

What's in the Background, Bing and Dean?

This "Weird Wednesday" I thought I'd highlight two of my favorite singers - Dean Martin and Bing Crosby.  How cool is it that society was so non-litigious we were as a society that there is clearly photographic evidence of Bing and Dean smoking, in front of a no smoking sign, and it was no big deal?  I wish we could go back to that time.
Best Wishes Amanda at 4:24 PM No comments:

“I’ve had so many pictures taken with my wife (June Haver)  that I’m beginning to feel like Tony Curtis.”

I find both Fred MacMurray and June Haver delightful.  They were married 37 years, from 1954 until MacMurray's death in 1991.  They adopted twin girls in 1956.

June is not remembered as she should be and Fred seems to be remembered solely for My Three Sons.  Not that it wasn't a good show, but he was great in many other projects, most notably in Double Indemnity, a Film Noir classic.  My current MacMurray favorite is Above Suspicion (1943) which I saw recently on TCM.  My favorite June Haver film is her last film appearance, The Girl Next Door (1953).

Can now refer to Tony Curtis as “your honor”.  He won a hotly contested race for the mayor of Universal City.  But Tony would rather be a proud father.  He and Janet Leigh are still hoping for a baby any time now.

Has got a new act.  She’s become coy, shying away from spotlights and microphones as if she really meant it.  Maybe Profirio Rubirosa has put the brakes on her.  If he has, he did more than George Sanders was ever able to do.

Zsa Zsa and Profirio started dating in 1954 after Zsa Zsa's divorce from George Sanders.  Rubirosa was a Dominican diplomat, polo player, Formula One driver, and playboy.  Known to have dated hundreds of actresses because of his enormous "gift", the French nicknamed giant pepper-mills after him, "Rubirosas".

Profirio married several glamorous actresses and wealthy women including: actress Danielle Darrieux, socialite Doris Duke, and socialite Barbara Hutton.  Every film I've seen with Danielle Darrieux in it has been delightful.  Surprisingly the marriage-prone Zsa Zsa and Profirio never married each other.  I wonder why?
Best Wishes Amanda at 3:21 PM 1 comment:

Is Gregory Dodging the Taxman?

For some reason, those European made pictures just don’t seem to come off as well in America as the Hollywood-made ones.  Maybe it’s due to the terrific publicity and promotion Hollywood gives the films.  And absence does not make the heart grow fonder with the American movie-going public.  Alan Ladd, after eighteen months in Europe, is having to get a new grip on his fans; so is Kirk Douglas.  And Gregory Peck is beginning to seem like a stranger in American theatres.

Ironically, Greg told us he thought it unwise for an actor to stay abroad eighteen months just to escape the income tax.  To keep busy he’d likely have to accept inferior pictures, and his career would suffer in the long run.  Then, going against that judgement, Greg took the leap himself.  Now he may wind up paying taxes to both England the the United States, as “Moby Dick”, which is being shot in Britain, is running over schedule.  “Moby Dick” can be the most exciting picture of all time – or the most resounding flop.  John Huston, forever experimenting, is handling the film as Herman Melville wrote the book – as an allegory.  We can recall no successful transformation of allegory to the screen.  So Greg is really taking a chance.

I have yet to see Moby Dick, even though I'm told Gregory's performance is wonderful.  I just did not enjoy the book at all, so the thought of seeing the film is not that appealing.  Is it anyone's favorite film?
Best Wishes Amanda at 2:24 PM 1 comment:

For several years, president of the Screen Actors’ Guild, is a very able speaker.  He’s putting that gift to use by visiting the plants of his TV sponsors and talking to the employees.  That’s one excellent way of building a neat television audience, don’t you think?

Ronald Reagan hosted General Electric Theater from 1954 to 1962.  He spent ten weeks a year traveling to different General Electric plants as their ambassador.
Best Wishes Amanda at 1:52 AM No comments: