Judy Garland
And Marlon Brando are the present favorites to get the Oscars for the best female and male star performances of 1954. Judy may have some competition from Dorothy Dandrige for “Carmen Jones” and Grace Kelly for “Country Girl” – but the sentiment is riding with Garland, and that’s a powerful factor when a Hollywoodite makes a comeback. Along with Marlon, James Mason will likely receive a nomination for “A Star is Born”; and Dan O’Herlihy for “Robinson Crusoe”. At least, that is the way voters are thinking right now. 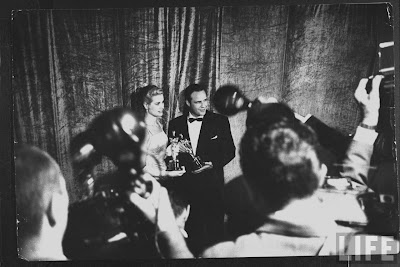 Judy Garland did not win the Oscar - Grace Kelly won for Country Girl. Marlon Brando did win for his performance in On the Waterfront (which was fantastic). The film also took home the Best Picture Academy Award, Best Supporting Actress Oscar to Eve Marie Saint, and Best Director to Elia Kazan that year.
Best Wishes A at 2:28 AM