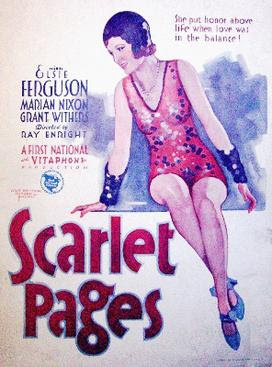 Spoiler alert!  It turns out that not only is Bancroft Nora's lawyer, but secretly the mother who gave her up for adoption.  Not only that, but the district attorney is Nora's father (he never knew).  This seemed insane.  The device used to get this information was Mrs. Kennedy, a woman who worked at the home who apparently keeps track of every former orphan personally and for some reason carries around this particular adoption card.  There is no way this would be included in a real courtroom.  Not only that, but the odds of all these events coming together in this way was so improbable, that I was taken right out of the film.  Such a shame, since I was enjoying it.

And of course, because of this insanity, no punishment.  In fact, Mary Bancroft claims it is all her fault because she gave up her child.  In the real world, this would have to be some sort of mistrial.  How can there not be a conflict of interest when the District Attorney and the defendant's lawyer are the defendant's parents?  And how would you be assured that the truth was known?  Insanity!

Prior to the ending, I really enjoyed the film.  I found Elsie Ferguson particularly fascinating, both her portrayal and the role.  Mary Bancroft was a strong, independent woman at the top of her field.  Coming out in 1930, I found this intriguing and ahead of it's time.  And while she did use emotion to sway the jury more than I wanted to, she seemed a smart, successful individual.  Elsie Ferguson was apparently a very successful actress, acting mainly on the stage, but also some films.  Known as "The Aristocrat of the Screen", which if this film is any indication, is highly deserved, Scarlet Pages was her only "talkie" and her last film.

While the film was enjoyable as a whole, ending aside, a striking disappointment was Marian Nixon as Nora.  Unbelievable, grating, and annoying, she was apparently a very successful actress in both silents and "talkies".  Her performance was like nails on a chalkboard to me.  This was not her first film, nor her first starring role, nor her first talking picture.  I think I'll have to look for more of her films to judge her skill.  If I had just this film to judge her by, I would think her a terrible actress.  Has anyone seen a good performance by Marian?  Maybe she was still getting used to sound films?  I had to grit my teeth every time she appeared on screen.  Just wretched.

I found this early talking film worth the watch (even with Marian and the ending).  Perhaps not worth a second view, but definitely a first.  The novelty and wonderful performance of Elsie Ferguson made this film.  Too bad she only made one sound picture.  She definitely is "The Aristocrat of the Screen".
Best Wishes A at 4:12 AM