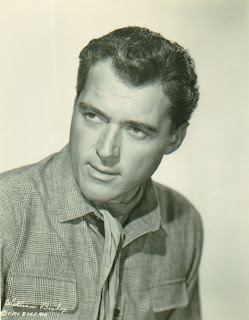 William Bishop was born July 16, 1918 in Illinois and died October 3, 1959. He started out at MGM and later worked freelance for Columbia pictures. His first credit was in the classic Song of the Thin Man. His last role was opposite Fred MacMurray in The Oregon Trail (1959). Anyway, here are William Bishop's 3 Wants for 1956:

It's a Great Life was an early TV show about two ex-GI friends rooming together in a Southern California boardinghouse. The sitcom aired in syndication under the title The Bachelors. William Bishop played Steve Connors for the entire fun of the show. It only ran from 1954-1956, so unfortunately it didn't work out for William.

As far as I can tell, none of poor William's wishes came true. Ironically he died of cancer at age 42 in 1959. Not bad looking either. I wouldn't have minded if he "put the proverbial ring around my nose"!

Email ThisBlogThis!Share to TwitterShare to FacebookShare to Pinterest
More Info: 1950s, Actors, What 100 Stars Want Most in 1956, William Bishop