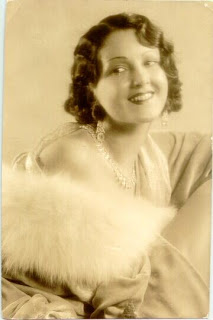 Mary Duncan (August 13, 1895 - May 9, 1993) had a relatively short career by Hollywood standards. She made about 20 films before getting married and retiring to Palm Beach where she became THE person in society, counting among her friends the Duke and Duchess of Windsor and Rose Kennedy. She spent her days socializing, doing charity work, and golfing until her death at 97 years old. 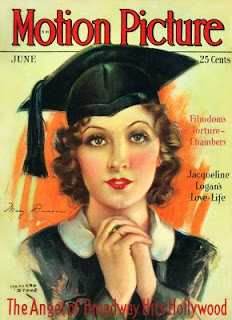 Mary Duncan first encountered our wonderful masseuse, Madame Sylvia in 1928. Mary asked Sylvia to be her full-time masseuse. This would involve giving Mary morning, noon, and night massages - plus dietary tips for a period of 1 year. 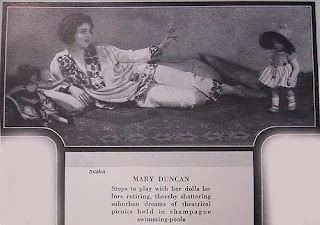 Sylvia wasn't so keen on the idea, worried that there would be the same drama she endured during her association with Mae Murray. However, Sophia Wachner, dress designer at Fox Studious, needed Sylvia desperately to be Mary Duncan's masseuse. Mary did not fit into any of her dresses at the hips for the upcoming production of one of the last silent pictures, "Our Daily Bread". 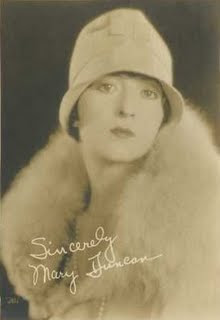 Naturally, Sylvia couldn't refuse, so she accompanied Mary Duncan on the set in Pendleton, Oregon along with Mary's Sealyham pup named Topsy, Mary's hairdresser and maid, a gallon of mineral oil *an ace-in-the-hole of all reducing diets at the time), and of course, Mary Duncan herself. Pendleton, Oregon was having a fair and they made Mary Duncan queen of the fair. They had her and Sylvia ride ponies down the street. Unfortunately, Mary did not know how to ride, and somersaulted off her horse and caused quite the scandal because she of course, was wearing no panties! How naughty of her ;) 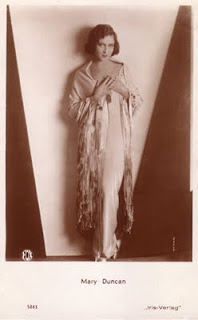 During the filming, the crew and Mary (plus director Murnau) all rented bungalows in the city. Murnau is best known for the pivotal silent horror film, Nosferatu (which I watched Sunday night on TCM by the way). Murnau and the rest of the crew seemed to take advantage of Sylvia's skills, even though Mary was the only one paying her. This included massages and dietary food.
Well, one night Murnau couldn't make it over for dinner, so he asked Sylvia to make a meal of salad for him. One of the ingredients Sylvia used for weight loss was mineral oil salad dressing. As we all know, too much of it can make you quite sick. On this particular night, Sylvia had already dressed the salad. Sylvia's assistant did not realize this, so she put more mineral oil salad dressing on. The director Murnau got quite sick and accused Sylvia of poisoning him!
It was a complete accident, but Murnau did not trust her again. But the pain was so great, that he needed Sylvia's help to get better. madame Sylvia prescribed rice water, toast, and tea without cream or sugar. 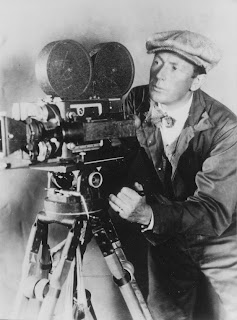 Murnau
When the party got back to Hollywood to shoot the interior scenes for the film, Winnie Sheehan, a Fox Executive, with livid with Madame Sylvia. Not they though Mary Duncan was too thin, and this would wreck the continuity of the film. So of course, Sheehan fired poor Sylvia, or "that lemon squeezer", as he called her.


Up next - Madame Sylvia gives Ramon Navarro a rubdown
Best Wishes A at 8:21 PM

Lovely post! I am really enjoying this series. xx

Thanks for this fascinating bit of Hollywood history! I had never heard of Mary so especially enjoyed this post! She was a beauty and made her way into "high society" didn't she! All that and lived to be 97! What a gal!

This series is great. Again, thanks for sharing...keep 'em coming!