David Brian (August 5, 1914 - July 15, 1993). Dancer-turned-actor David Brian didn't enter films until he was in his mid 30s, yet he made a great impression on moviegoers in such films as Flamingo Road (1949; with Joan Crawford and Zachary Scott), The Damned Don't Cry (1950; with Joan Crawford and Steve Cochran), and The High and the Mighty (1954; with John Wayne and Jan Sterling). David Brian passed away from natural causes at the age of 78. Some of his poetry is on display at Kent State and Boston University. 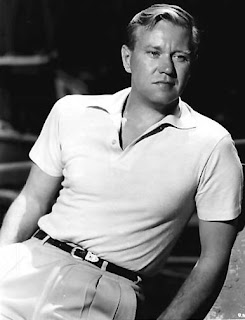 I can't say I have heard of David Brian before I found out what films he was in. I have seen most of them, so I must have seen him, although I can't quite remember him personally. I think his wishes are great. His first wish I believe has to do with support of an orphan organization. I was not able to find any information on it because so many organizations have that acronym and I just didn't have time to go through them all. Henry the VI would be a wonderful role for any actor and I hope he had the opportunity to play him. He didn't in any films, but he was mostly on TV in westerns primarily. And I'm all for palm trees, so preservation of them in California would be fantastic.

Email ThisBlogThis!Share to TwitterShare to FacebookShare to Pinterest
More Info: 1950s, Actors, David Brian, Movieland, What 100 Stars Want Most in 1956