Vintage Book of the Week - Fright by Cornell Woolrich 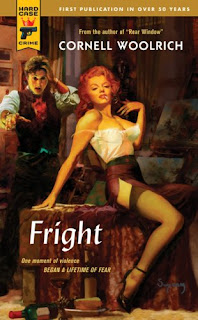 Just finished this gem from one of my favorite book series, Hard Case Crime. They basically reprint old pulp novels as well as new books written in the pulp style. Fright was written by the fabulous Cornell Woolrich. Woolrich wrote fantastic mysteries. This gem was written in 1950.
Anyway, Fright is the tale of Prescott Marshall and his horrible mistake. A few days before his wedding, Marshall decides to have some fun with a prostitute. His indiscretion decides to blackmail him and basically stalks him wherever he goes. Not only that, but an hour before he gets married, he basically goes nuts and kills the prostitute.
This book was very disturbing and suspenseful. I was a little leery of it at first, but I really liked it. I loved the cover too. It was created by Arthur Sydam. To me, it totally looks like Marilyn Monroe.

Buy it at Amazon
Buy it at Barnes and Noble
Best Wishes A at 4:14 PM

I like a mystery, that gets your mind working...

I agree, the woman on the cover does look like MM.

Just found your blog the other day and am enjoying your posts so far. I'll be a regular reader!