Donald and Francis the Mule take a Break 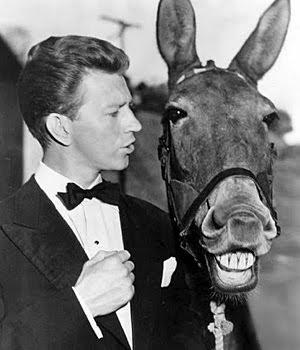 Donald O’Connor
Says he has no time for serious romance these days. His idea of relaxing evening is to catch two western feature pictures. Don is not so wealthy as most people imagine because until he clicked in “Singing in the Rain,” he worked for practically nothing – as stars go. His first Universal-International contract, which ran for seven years, paid him $200 a week. Donald doesn’t intend to do any more pictures with his pal, Francis the Mule unless U-I comes up with a good script and an interesting salary offer.
(Source:Movieland; 1955)
Best Wishes A at 1:05 AM