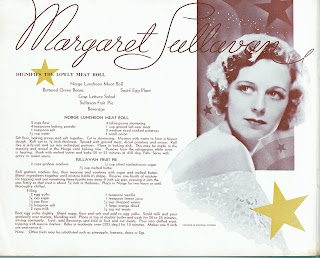 Oscar-nominated actress Margaret Sullavan (May 16 1909 or 1911 - Jan 1 1960) provides today's dish. And as the cookbook says, she will be dignifying the meat roll. I'm gonna assume it's like meatloaf (hoping at least). So with that said, here is her meal plan: Norge Luncheon Meat Roll, Buttered Green Beans, Sauteed Egg Plant, Crisp Lettuce Salad, Sullavan Fruit Pie, and the Beverage of your choice. I 'm surprised she didn't say Coffee like most of the other starlets. Margaret's meal sounds pretty good. I've never had Egg Plant, but I would probably eat this meal. 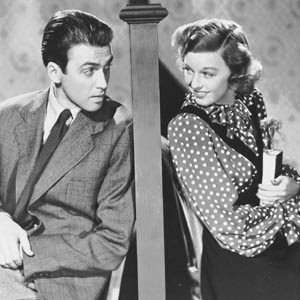 Margaret lead a troubled life. She grew up with a muscular weakness that kept her away from others until she was six. Wonderfully though, she became a social butterfly in middle school and high school. She got her start as part of the Harvard Dramatic Society, against her parents wishes. Margaret arrived in Hollywood May 16, 1933. Margaret appeared in several films, many of which involved her pairing with Jimmy Stewart. For a more in depth bio, check out: http://en.wikipedia.org/wiki/Margaret_Sullivan 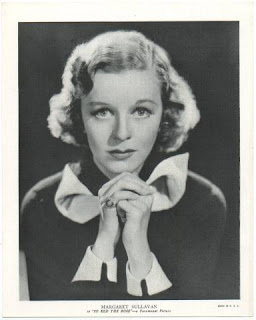 Margaret had 4 husbands. I bet you've heard of at least one of them. They include: Henry Fonda, William Wyler, Leland Hayward, and Kenneth Wagg 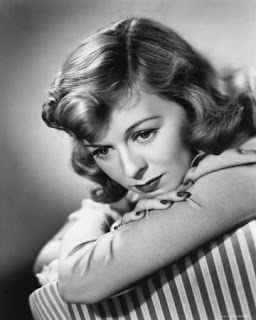 Margaret Sullivan apparently had a really strong personality. It was said that she was one of the only people that made Louis B. Mayer quake in his boots. Her anger it was said by some contributed to the death of Sam Wood. Margaret and Sam had a violent argument, and he had a heart attack after it. Yikes! 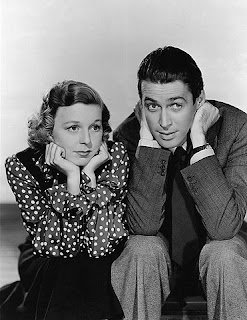 Unfortunately this strong woman had a sad end. She overdosed on barbiturates on January 1, 1960. It was deemed accidental. As a macabre side note, two of her three children committed suicide, her daughter Bridget at age 21 only 8 months after her mother and her son Bill in 2008 at the age of 66. Poor troubled souls.

Another unique meal that I wouldn't turn my nose up at right away ;D The eggplant (love it, especially in Italian and Greek dishes) and dessert sound particularly tasty.

Thank you you very much, sweet dear, for all of your lovely comments. I hope you're having a wonderful and relaxing weekend!
♥ Jessica

Ah, eggplant. Yum. It's very good, you should try it sometime!

I love Margaret, too. She had an interesting speaking voice and lovely, sad eyes. Have you read her daughter's book, "Haywire"? Apparently she talks quite a lot about her mother and the issues she had.

I haven't read Haywire, but after reading about Margaret's life (and from Elsie's wonderful suggestion), I think I might.