Theda Bara is one of the most iconic stars of all time.  If you bring up the famous stars of the Silent Era, she is certainly one of the very first names that comes up.  Unfortunately, while her image may be familiar to many, her acting and the lightning impact she made on society is not.  Time has not been kind to her nitrate films, most are lost.  Mysterious and intriguing, she became the Vamp, THE sex symbol of the era.  Even though she was active a mere decade, she has an amazing 44 credits to her name. 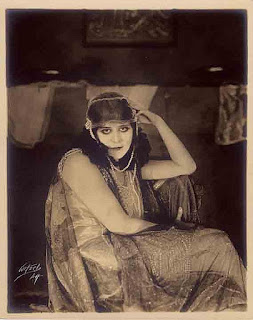 Theda Bara, My Mentor follows Theda Bara and her relationship with a little girl, her neighbor, Joan Craig, during the 1940's and 1950's.  Joan was born to wealthy parents and lived across the street from Theda Bara and her husband, director Charles Brabin.  Bara and her husband Brabin had long since retired from films and were living a quiet life in Beverly Hills.  One day, Joan noticed Brabin, or Uncle Charlie, and her life changed forever.  After visiting the Brabin's home, the infamous Theda Bara decided that Joan was special and began a relationship and friendship that would last until Bara's death. 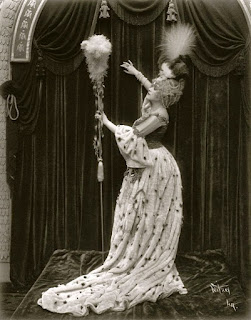 The mentor relationship between Bara and Joan was quite interesting.  Joan seemed to spend most of her free time at the Brabins's house.  She learned about Theda Bara's career, was coached on how to be an actress, explored the occult, such as telling fortunes, using a Ouija Board and seeing into a crystal ball, and basically, life.  I have this romanticized notion in my head of a Norma Desmond in Sunset Boulevard view of the aging star passing on her wisdom to the sole young person willing to walk into their cavernous abode.  It sounds like and enchanting childhood, but in a modern view, I imagine it could be misinterpreted.  People with no children taking interest a local child would be thought of in a very different light today.  It wouldn't be seen as eccentric, but nefarious.   I wish this wasn't the way, but I can unfortunately see people viewing the story in that light.  I hate that this thought crept into my mind while reading this book, because I don't think that was the situation. 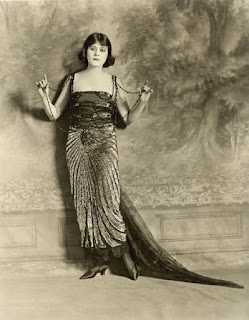 The book is divided basically into three parts: Joan's memories of Theda, a filmography of Theda's work, and a short biography of Charles Brabin.  The first section of Joan's memories are somewhat in order chronologically.  It begins with a brief biography of Theda and then breaks into random memories.  There are mostly in order, but do jump back and forth a bit, occasionally repeating, which may be confusing.  For example, there is a memory about the Ingrid Bergman film, Joan of Arc, which Theda and Charles consulted on, something else happens, then we are again talking about Joan of Arc 50 pages later.  The second part chronologically lists every Theda Bara film with a short summary of the film, with tidbit memories thrown in.  Part three is a short biography about Charles Brabin.  This was one of my favorite parts, because I knew so little about him. 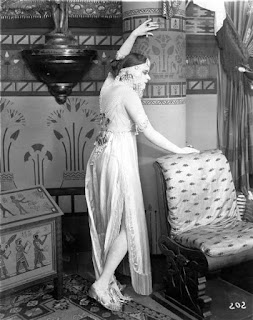 A short biography of Theda is easy enough to find elsewhere so I won't cover that, but I was fascinated by what memories Joan Craig chose to talk about.  I'm curious if the book includes all of her memories of Theda or if this is just a smattering of the highlights.  First and foremost, the Brabin's lives seemed amazing.  Everything they wanted to do, they could do.  It is the definition of what a fun, adult life would be - garden parties, dinner parties, vacations, etc.  I initially imagined that Theda was a bit of a recluse, but she seemed to have quite the social life, just not the Hollywood party life that would be covered in the Hollywood magazines, especially since neither Theda nor Charles were especially active in pictures.  I was fascinated by the parties they had and who attended them.  When reading other reviews, many found these details boring and unnecessary, but I love this kind of thing. 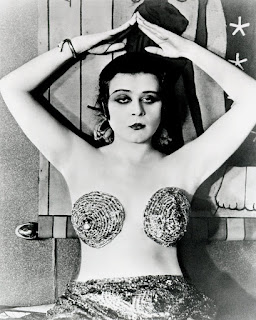 Theda seemed to have a distinct sense of how Joan should live her life.  First and foremost, she was to be an actress.  I'm not sure what made her decide that Joan would be a good actress, but Theda seemed hellbent on making her a star.  One could think it's cute or creepy, depending on your view of the situation.  Joan would perform for the Brabins at their home.  She would participate in school plays and Theda would attend, mysterious in a dark veil.  Theda would even advocate for Joan to have better parts in the school plays, insisting that she was the best actress in the school.  This is probably one of the best examples in the book of how eccentric actions could be misinterpreted in a modern world.  A middle aged woman, taking a special interest in a child who is not related, calling teachers advocating for them, and spending a ton of time with them by choice when they not babysitting them.  At one point in the book, Joan convinced Theda her home life was miserable (even though it wasn't) so Theda proposed adopting Joan.  This is where Joan's parents drew the line.  Joan came from a wealthy parents, a huge home, so there was no reason.  This is definitely red flag territory to me. 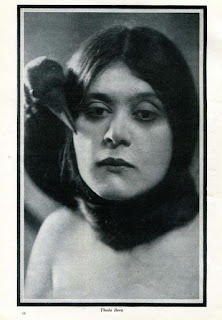 Joan was also exposed to what I find most intriguing - the vamp side of Theda Bara.  While Theda would say she was just a normal girl, she had an occult side.  We all know Theda Bara as the Vamp onscreen, and while she is an actress, I was really excited to know that she was in fact, partially like that in real life.  Juxtaposed between stories of garden parties and scripts, we hear about Theda's predilection for karma and the more magical sides of life.  She read tarot cards, would use a Ouija board, and looked into her crystal ball.  She had a skeleton in her home.  The famous one in pictures.  She believed in fate, yet explored the occult; believed in providence, yet actively made things happen to her liking. 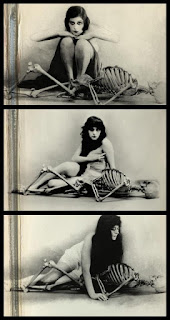 Some of the more provocative memories pertained to Theda Bara's possible involvement with the HUAC House Un-American Activities Committee and Hollywood Blacklist.  She did not appear to name names, but seems to have tacitly supported it and even went to the hearings with Joan in tow.  Joan was particularly moved by Katherine Hepburn's speeches about HUAC.


Joan is fairly clear that the Brabins were wrong for supporting it, but also seemed to imply that the Brabins were just supporting their friend, Adolphe Menjou, who was actively pro-HUAC.  There was so much euphemism, so it was difficult to figure out exactly how involved the Brabins really were in the movement.  This seemed to be the only semi-bad memory of the Brabins that the author had.  Joan was so close to the Brabins, I imagine she feels some obligation to protect and promote their legacy.  And she was just a child, so how much would she have been told?  Would those around her have felt some obligation to protect her from what was viewed as a great and immediate threat?  While Joan didn't seem to know exactly what was happening as a child, she definitely feels horrible upon reflection as an adult. When you think about HUAC, the Brabins aren't the first people the come to mind - if at all.  I would be curious about how much the Brabins were actually involved.  Aside from being good friends with Adolphe Menjou and Republican, I wasn't able to ascertain any active participation by the Brabins other than attending events their friends held.  I'm not sure we will ever know if they did more than that, because aside from Joan, who is left who can speak to the issue? 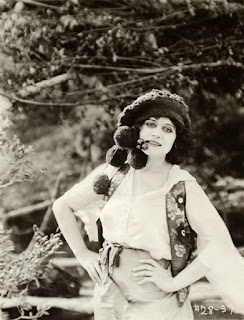 I had just as many questions about the life of Theda Bara after reading this book as I did before.  She was mysterious and iconic, but the memories of her neighborhood friend brought Theda's everyday activities to life.  Through memories of what might seem mundane to others but incredibly valuable to those who enjoy social history, gave a more well-rounded view of the enigmatic star. 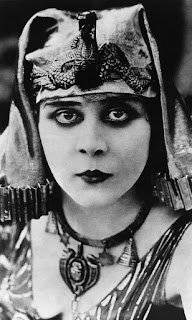 A few thoughts after reading this wonderful memoir:
1.  Charles Brabin is an overlooked director who needs a biography and renaissance
2.  Theda Bara was every bit the mysterious sphinx we always thought her to be
3.  How do I find such a cool mentor?
4.  What happened to her cool decor such as her crystal ball and skeleton?
5.  Why did Joan sell so much of her Theda Bara inheritance?   Did it become more of a burden?  Was it more about getting older and getting rid of possessions?  Need for money?  Wanting to "share with fans', even though the items usually fall into the hands of wealthy collectors, stuck in storage lockers? 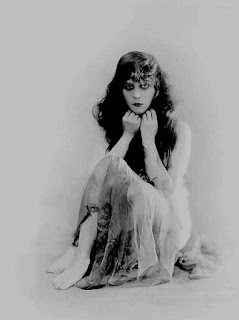 This was a fantastic insight into the enigmatic life of one of the world's first film stars, Theda Bara.  The rich photographs that filled book brought a new dimension to her.  We may not have many of Bara's films, time saw to that, but by reading Theda Bara, My Mentor, we can discover her magic again.

It's fascinating to hear what Theda was like away from the screen. I wish more of her films could be discovered.