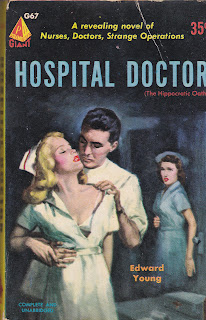 I'm usually a little reticent to read medical novels or watch medical television shows because of all the medical drama I've had myself.  Bad thoughts abound usually, but I decided to give one of my pulp novels a try,  Hospital Doctor by Edward Young, published in 1952.   Medical novels and romances were all the rage at the time this book was published.  While they may not be bestsellers today, the medically based television shows are still a TV staple.  And surprisingly, I do enjoy The Knick and Ripper Street, which often have medical scenes, but the others are too much for me.  Maybe the historical context helps diminish the trauma.  Or maybe it's because of the lack of all the medical device beeping which seems to amplify anxiety. 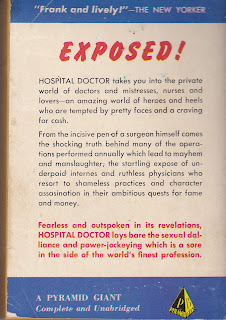 A reprint of 1938's The Hippocratic Oath, Hospital Doctor by Edward Young is the story of idealistic new intern Frank Durbin.  It is supposed to also be some kind of expose into the seedy underbelly of the hospital world.  At the beginning of the book, Frank will do anything to help patients - even going to dramatic endeavors to save those most doctors would let die.  This puts him on the outs with most doctors at the hospital because they basically look at the patient and do the minimum.  If they think the patient will die, they don't even bother trying.  Unfortunately for Frank, he wants to be innovative.  He knows medicine moves fast, and he wants to find cures for things deemed incurable.

Of course there are also tons of scandals - tons of hookups, using people, bribery, deals with medical supply companies, v.d. scares, back alley abortions, unauthorized autopsies, and more.  Young Frank grows up and learns what the 'real world' of medicine is all about.  Most of the pulp novels I've read seem to have the same theme of 'growing up' or a journey to knowledge which changes their life.


Frankly I found this a disturbing book.  I think that was supposed to be the point.  I hope this kind of stuff doesn't go on at hospitals, but it all seems too plausible.  The behind the scenes 'gray areas' were troubling and the bed jumping was predictable, but the book had a good pace and kept me interested.  Surprising for a medical pulp fiction book.   And printing the famous Hippocratic Oath doctors take opposite the title page - while probably a novelty - did make you think about what it really means while reading the book.
Best Wishes A at 4:39 AM