Pulp Fiction - One Monday We Killed Them All by John D. MacDonald 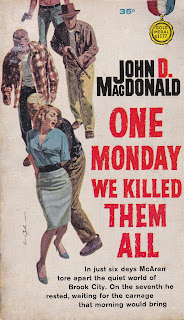 Dwight McAran is getting out of jail. The town bad boy no one wants him on the street. He's been in jail, but unlike most, is not broken. In fact, he's more than ready to get even. Detective Fenn is challenged with keeping tabs on him. A tricky situation - especially since he's Fenn's brother in law. Faced with trying to keep the sociopath Dwight out of trouble, for the good of the town and in order to save his marriage, the future of the town depends on Fenn's skill. The relationships between Fenn and his wife is beautiful, pure and timeless, a marriage we all should strive for, juxtaposed with Fenn's adversarial and confrontational relationship with Dwight, as well as the motherly relationship Fenn's wife Meg has with Dwight are the real gems of the book. 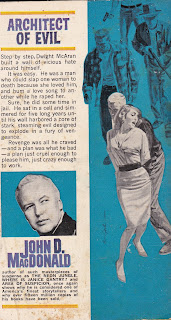 I really enjoyed this book. A bit brutal, but that's Noir for you. The plot is incredibly in depth. The language is rich and transports the reader. Just like every time I read an older book, I adore the language and how descriptive it is. I almost want to read it aloud because it's so refreshing. In modern books it almost seems like they reuse the same 100 words. This pulp fiction was most likely considered low brow in 1961 when it was written, but with the dumbing down of language in modern books, John D. MacDonald's prose seems like Shakespeare.      Title wise, the title seems to have nothing to do with the story as far as I can tell. It's an intriguing title. I definitely wanted to know why everyone was killed, on Monday, no less, but alas, it seems to have nothing to do with it.  And by the way, the blond on the cover doesn't show up until you about 95% of the way through the book.
Best Wishes A at 7:00 PM