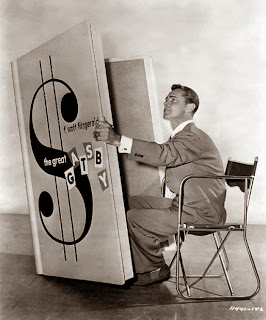 Alan Ladd played Jay Gatsby in the 1949 adaptation of The Great Gatsby.  I haven't seen this particular version, that I recall.  I haven't seen this year's adaptation either.  I just can't bring myself to see a film starring Leonardo DiCaprio.  He is just to swarmy for me.  I have seen the 1973 and the 2000 versions and found them less than impressive.  I just don't know if anyone has the acting chops to bring Gatsby to life.

I've always been a fan of Fitzgerald.  He's huge in my hometown, since he was born here.  I would love to see an adaptation of his work that was done well.  No luck so far.  I adore Alan Ladd.  He's one of my favorite actors - on film and on the radio.  It would definitely be fun to see what he did with the role of Gatsby.  Has anyone seen this version of Gatsby?
Best Wishes A at 12:44 AM