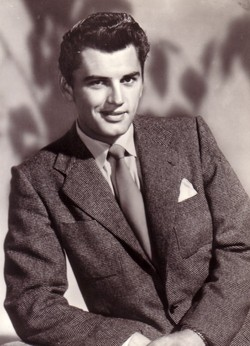 Edmund Purdom
Looked like a sure bet when he took over the acting part of “The Student Prince” for Mario Lanza. Now he’s rapidly approaching the point where he is the subject of as much discussion as Lanza, who, by the way, is really on the road to recovery and may yet do “The Vagabond King” with Kathryn Grayson. You’d think Purdom would be a model of co-operation because of the tremendous break he received but those temperament rumors have been circulating about Edmund almost from the time he started “The Student Prince”. His wife, Tita, worked as a ballerina to help support the family during their lean days but she gave up her career to take care of their children after Edmund started clicking. Now, Mrs. Edmund Purdom has announced that she will proceed with plans for a separation or a divorce. At the time she announced these plans, Mrs Purdom reportedly said, “We had four years of poverty and we clung together like babes in the woods. But when he became successful it all changed. Now he says he dreads seeing me.” Edmund and Tita were married on January 5, 1951 in London. They have two children, Lilian, aged two and Marian, aged six months.


Edmund Purdom (December 13, 1926 - January 1, 2009) was born in Hertfordshire, England. His acting career began in 1946 and continued almost until his death. His starring roles were mostly in the 1950s. Finding his career fizzling out, Edmund relocated to Italy where he spent the rest of his life. He was one of the main dubbers of Italian films. Married four times, his marriage to Tita Phillips from January 5, 1951 until March 5, 1956. Word has it that he was secretly seeing dating Tita's co-star. Edmund married Alicia Darr on April 10, 1957 and they were married until August 17, 1958. His best known wife was Linda Christian, former wife of Tyrone Power. Linda Christian and Edmund Purdom were married from March 24, 1962 until January 10, 1963. 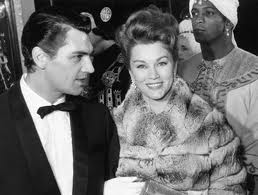 Edmund Purdom and Linda Christian
Edmund Purdom was also known for lucking into some great roles. He got his role in The Student Prince from Mario Lanza. Some sources say it was because of a disagreement between Mario and the director - others say it was because Mario was seen as too heavy. One of Purdom's other starring roles, that of Sinuhe in The Egyptian, came to him after Marlon Brando turned it down.
Best Wishes A at 12:01 AM

Thank you for stopping by and leaving a lovely comment.x.

His talent was not valued.

His performance in SINUHE, THE EGYPTIAN is a classic movie one that is admired up today.