Why can't Hollywood leave an amazing film alone?  Ben Affleck is set to direct and star in a remake of the 1957 Billy Wilder classic Witness for the Prosecution.  As many of you know, it's one of my all time favorite films.  I seem to have gotten into a bit of a tiff with people in the Variety comments section about it.  I'm sick of remakes, even though I know they have been around since the start of films.  I also find it hard for modern actors to match Charles Laughton, Marlene Dietrich, Tyrone Power, Elsa Lanchester, and more.  Ben as Tyrone - I think not.  You need strong presences, and I can't think of many.  I also have the apparently unpopular opinion that I find Ben Affleck to be a terrible actor - and it's not the Batman thing.  I have always thought it and have yet to find a film that changes my mind.

The Olympics seems to be the thing right now.  There is some amazing sporting achievements.  Just beautiful to watch.  Comet Over Hollywood is telling to tales of Olympians turned actors.  Some played up this fact like Buster Crabbe and Johnny Weismuller, but there are some I had no idea about like Bruce Bennet who famously played Joan Crawford's husband in one of my favorite films, Mildred Pierce. 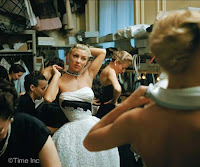 Glamour Daze has another amazing feature, some backstage photographs of a 1954 Christian Dior fashion show.  I adore vintage fashion (and some modern, too).  It's odd because I basically couldn't wear it if I tried (the scoliosis always rears it's head).  And since I can't seem to wear anything but yoga pants and a baggy shirt without drawing massive attention to my deformities, I guess I appreciate it for beauty's sake and wonder what it would be like to wear something pretty - or even something I want to wear.

I was in high school during the Grunge era, where Alice in Chains thrived.  Frankly, it's the music I most identify with and is the most therapeutic to me.  Lately I have been a bit down, losing my job and on my third full-time month of searching for one with no luck.  This song speaks to me on so many levels: memories, despair, pain, loneliness, etc.  I do come a different place from where this song came from, but the atmosphere and pain couldn't be more like what I feel.  Poor Layne Staley had an amazing voice, dying tragically from heroine addiction and because he was a recluse, no one noticed it until two weeks after he died.  Tragic.  While I don't know about that personally, I know pain and like Layne, I basically live like a hermit, maybe leaving my house once a weekm if that.  When no one is interested and there is no reason to leave the house, it's difficult to do more than get the mail.  'Nutshell' speaks to my soul.

I'm find a huge playlist of E's Mysteries and Scandals.  This was prior to becoming the K channel aka the Kardashian channel.  E showed Hollywood history, fashion, Talk Soup . . . there were a million reasons to watch the channel.  Know there are none.  I don't know if I mentioned it before, but it is one of the main reasons I became interested in Classic Films.  And yes, they did over simplify and maybe go off the deep end in some of the scandals.  I wonder if Larry Harnisch from one of my favorite sites, Daily Mirror, likes the Black Dahlia episode?   He's a Black Dahlia expert and thankfully has taken it upon himself to correct the record and disprove all the crazy theories on the subject and truth-telling enemy of Steve Hodel, the man who famously claims his father is the Black Dahlia's killer.  But having known basically nothing at the time these aired, they were a great starting off point.  I devoured films and books about classic films after I saw these.  When I checked a few years ago, Youtube barely had any episodes and the ones they had were not good quality.  I probably watched 10 in a row. 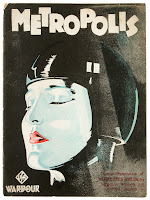 Metropolis is an amazing film.  I was checking my usual websites, and found this amazing magazine talking about the film.  I can't remember which site I saw this on and I don't want to put all the pictures on the site so I made it a pdf.  It's really cool and sheds some amazing light on the classic film.

I''m so excited Ripper Street is back.  It's one of my favorite shows and BBC America is finally playing season 4.  It's one of favorite historical television series.  This season is quite different from earlier ones.  A lot of the normal characters aren't there.  So far I haven't warmed to them yet, but will hopefully.  This season adds Harry Potter's Neville, Mattlew Lewis.  Unfortunately, BBC America doesn't really seem to care about the show much because they jostle the time slot all over the place.  Now it's 5 pm central on Thursday, which is not even prime time.  I'm glad it's on, but it seems like a guilty secret.  I suppose I shouldn't be surprised since BBC America has basically turned into 'just show anything with a British actor in it" aka the Star Trek Next Generation with Patrick Stewart channel.
Best Wishes A at 4:49 AM